VX4S
All-in-One Contoller
The VX4S is a professional LED display controller. Besides the function of display control, it also features in powerful front end processing, so an external scalar is no longer needed. With professional interfaces integrated, VX4S with excellent image quality and flexible image control greatly meet the needs of the broadcast industry, Its friendly in user-interface. so that the display to work has never been as easier and more enjoyable as with VX4S.

The inputs of the VX4S include CVBS×2, VGA×2, DVI×1, HDMI×1 , DP×1 and SDI× They support input resolution up to 1920×1200@60Hz; the input images of VX4S can be zoomed point-to-point according to the screen resolution;
Provide seamless high-speed switch and fade-in/ fade-out effect so as to strengthen and display picture demonstration of professional quality;
The location and size of PIP can both be adjusted, which can be controlled at will;
Adopt the Nova G4 engine; the screen is stable and flicker free without scanning lines; the images are exquisite and have a good sense of depth;
Can implement white balance calibration and color gamut mapping based on different features of LEDs used by screens to ensure reproduction of true colors;
HDMI/external audio input;
10bit/8bit HD video source;
The loading capacity: 2.3 million pixel;
Support multiple controller montage for loading huge screen;
Support Nova’s new-generation point-by-point correction technology; the correction is fast and efficient;
Computer software for system configuration is not necessary. The system can be configured using one knob and one button. All can be done just by fingers. That’s what we called Touch Track!
Adopt an innovative architecture to implement smart configuration; the screen debugging can be completed within 30 seconds; greatly shorten the preparation time on the stage;
A intuitive LCD display interface and clear button light hint simplify the control of the system. 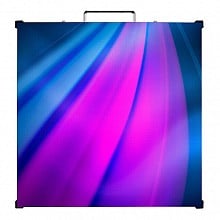